Many of you will have known about my great friendship with Dan Wooding, who passed away last Sunday.

I first met Dan in 1969 when he was a journalist on the Middlesex County Times and he wrote a small article about my having played on Space Oddity. He told me years later, that they were so hard up for stories that week as the only two other events happening in the area were a church flower show and a bring and buy sale somewhere!

We remained good friends for the next 50+ years and this carried on even after he moved to California to create the Christian News Service ASSIST and to do nonstop Christian work, not just in California, but all over the world. He travelled to some very dangerous countries and thought nothing about confronting men like Idi Amin to tell him he thought he was a nasty cruel man and needed to mend his ways!...

I remember calling Norma his wife on one occasion to speak to Dan and she said. “He’s not here. He’s in prison in Africa somewhere, but don’t worry, you know Dan, he’ll get out!”...and he did...apparently he converted some of the prison guards to Christianity and they let him go!

Before moving to California, Dan worked for the Sunday People as a reporter on some very strange stories including one about a woman who chained her men to the bed posts. .....but nothing phased him. He also wrote some fabulous books including King Squealer and indeed an early autobiography about yours truly. 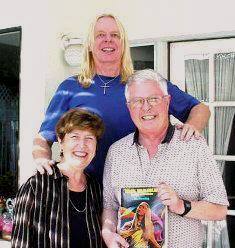 Rick with Dan and Norma Wooding

I could literally write a book about Dan and there really should be a documentary about him as his life was so full and rich with him touching the hearts of so many people. When he became ill, shortly before returning to England, I told him that I was sure he had some more time here on earth as whilst he was certainly always ready to meet God, I wasn’t sure that God was ready for Dan Wooding.

Dan left all who knew him, better for having known him. I used to call him Dan Widdling and his two lovely sons, Andrew and Peter found that quite amusing!.....but now my mate Mr Widdling has finally gone to a rightly deserved place in Heaven and I can only thank him for the friendship and love he gave to me and so many others.