Well February turned out to be quite an interesting month after all. In the last week I ended up speaking at a Parliamentary meeting at Westminster with other people from the music industry and it does seem very much that the present members of parliament and Lords from the other house, of all parties, are keen to help the music industry recover from the mess it’s put itself in. Most enjoyable. Here is a link to a short article in Q Magazine that appeared the next day.

The charity concert organised by Jim Davidson in Plymouth was a tremendous success and it was an honour to be a part of it. Great to see Bobby Davro and Jethro there as well. Both as hilarious as ever.

I spent a very enjoyable afternoon at the Royal College of Music listening to some tremendous playing from the percussion department and I’m currently writing a piece of music for them which I hope they enjoy playing as much as I will enjoy writing!

The Heritage Foundation lunch was probably the best I’ve been to. In Vicki Michelle they have a fantastic President for the year and she was given great support from her family and friends which was great for me. I got to meet the great Ray Winstone too. (Yes, I’m still a thespian groupie and proud of it)!!! 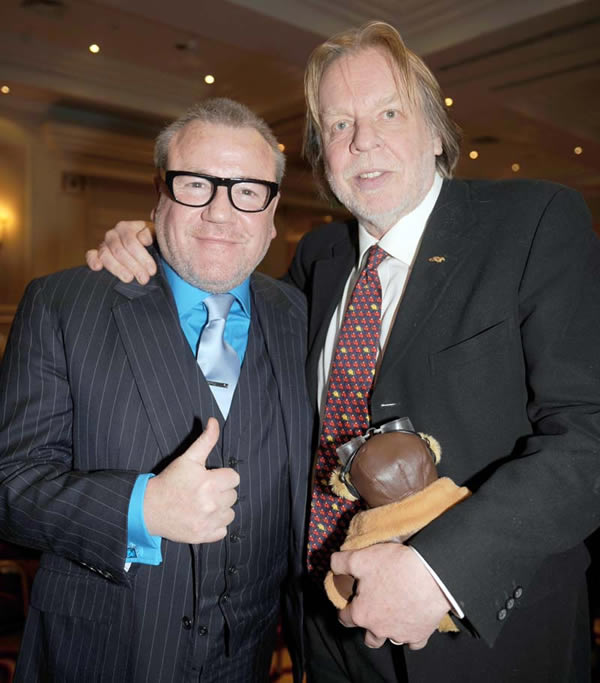 February really was completely full at the end of the day with more studio work for Cleopatra Records in America, more filming for Watchdog, (what great fun that is), a recording for Radio 4 of The News Quiz, (always great to be invited onto a programme that you are an avid listener or viewer of), and numerous other meetings and bits and bobs which meant......NO GOLF!!!!

Into March, and this seems to be just as busy. I’ve already been in the studio again with Erik to record more tracks for Cleopatra Records and also some independent artists. All most enjoyable.
Mark Jeeves (who many of you will remember as my producer and cohort from Planet Rock days), spent a very pleasant day with me putting together a pilot show for America. More news on that next month.

Tuesday 6th...I have a part in a Radio play for Radio 4....Really looking forward to that!...and on the 7th I am rehearsing the St Martin’s in the Fields Choir in readiness for the David Croft Memorial service the following week.

On Friday 9th I am one of the people invited to give an award at The Wetnose Awards in London. Check this out on their website. It’s a marvellous event and well worth keeping an eye on. I won’t say any more as I hopefully have got you puzzled just by writing this!

On Wednesday 14th, I am attending a very special awards ceremony at the Royal College of Music and more about that in the April GORR.
Thursday 15th is David Croft’s Memorial Service to celebrate this great man’s life and so many people wanted to attend that it has been made an all ticket event and the waiting list is longer than the amount of tickets already allocated!!!

Saturday the 24th sees me in Cornwall for the Caverns in Cornwall show which I am really looking forward to.

Add to all this, more shows for Radio Nova with Hoffy and meetings galore...it can only mean one thing........Golf under floodlights!!!

And remember...... in the meantime, you can catch up on everything and anything that’s happening on this website and also, if you like reading stupidity; then feel free to follow my stupid remarks on Twitter....GrumpyOldRick