It’s always great to be able to impart some exciting news and projects and certainly this month’s GORR will have just that in its pages and no better way to start than by announcing...

....which was actually the brainchild of Rob Ayling from Gonzo and was conceived as a three day event that would revolve around people I have worked with and my own band, The English Rock Ensemble of course. We have chosen as the venue for this 3 day event, The Boston Gliderdrome in Lincolnshire and the plan is as follows.

We are not planning to go through Ticketmaster or similar as they charge too much to all concerned, but Rob will be dealing with it himself and he would like people to write to the website showing their interest and going on a list, no money to be paid, so we can gauge what further advertising etc we will need to do.

The dates are Friday 30th October, Saturday 31st October and Sunday 1st November. We are also organising various hotel deals for people to book into as well.

It all starts on the Friday with a full day Saturday and a very special charity day on the Sunday which finishes around 5pm so everybody can head off home.

As of June 1st, WAKEmanFEST is lining up like this, with the proposed running order on our dedicated page

The Cadbury Sisters supported me on my last tour and were absolutely amazing. Everybody simply loved them.

The Electric Strawbs of course will be very special as I will be joining them for 2 pieces. The Hangman and the Papist and also Where is this Dream of our Youth?....and I will be using an original Hammond L100 similar to the one I used on the original recording at the Queen Elizabeth Hall.

Sir Henry of Rawlinson’s End is that wonderful piece written by the late Viv Stanshall who I worked with. Mike Livesley does an amazing version which I join in with every year at the Bloomsbury Theatre. His entire 11 piece band (plus me) will be performing it.

The London Philharmonic Skiffle Orchestra are heavily connected to the Water Rats who will benefit from the Sunday which will be a great day of entertainment.

Kevin Orkian is a music and comedy genius and also a Water Rat, hence his appearance which is not to be missed!!

All in all, it is going to be a really fun weekend and also the launch of the new book company HaGaTaS and there will be readings going on in adjoining rooms as well, so something happening all the time.
We plan this to be an annual event and really hope people will enjoy themselves....expect an early visit from father Xmas as well!!!

There are a few other things happening in June and it starts of course with the announcement that Hoffy and I are back on Planet Rock, on a Sunday morning (repeated Tuesday evenings) between 10 and 12.

I was also invited by Starmus and Garik Israelian (who proved the existence of black holes!) to attend a lecture at the Science Museum in London given by Alexei Leonov, the first man to walk in space. Here's a photo taken after the lecture with Dr Brian May and Prof Stephen Hawking. 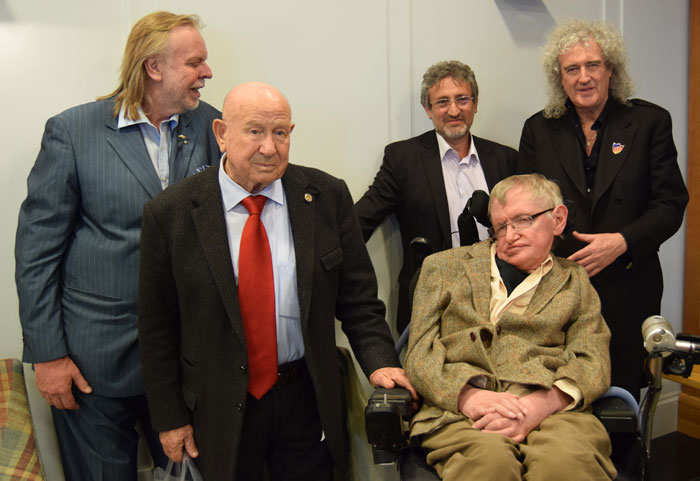 On Saturday 6th I will be guesting with the English Chamber Choir as part of their concert at the wonderful GRANARY in Beccles in Norfolk. I will be performing NOAH with them and also After The Ball and possibly one other piece.

On Monday 8th I will be in the studio with Erik Jordan completing the music for the STARMUS video. (Loads of information about Starmus on their website).

Thursday 11th is a sad day for me as I will be attending the funeral to pay my respects to one of the greatest drummers this country has ever produced. Mac Poole played with so many people and actually turned down opportunities with some huge bands for reasons only known by him. He finally lost his fight against cancer last week and he will be sorely missed by so many people.

On the 18th, 19th and 20th, there is a concert of some of the music from Journey to the Centre of the Earth, but not by me. Check this out & all in favour of the Grand Order of Water Rats too! I’m going!

On the 26th I’m performing at a wonderful dinner in aid of the wonderful Moon Bears campaign by the great actor Peter Egan. Check his website out. He’s doing a remarkable job and it’s an honour to be involved with him.
...and that’s about it for June....enough to whet a few appetites we hope.......bye for now