Almost March and it’s really starting to get busy now and so, believe it or not, I’m making a supreme effort to get myself healthy! Very serious dieting and gentle exercise (very gentle exercise)!
Just back-tracking a little, on Wednesday 21st of February I had the real privilege to witness 36 dogs that had been rescued from Romania, arrive in England ready for their forever homes.
Considering what awful starts these dogs had had in life with some of them destined to be skinned alive for their pelts and others simply tied to railway lines or drowned, these dogs were so placid and lovely when they arrived after their 2 days of travelling.
Please have a look at this short video taken as they arrived. You’ll recognise Peter Egan there as well.

I am actually writing this GORR early - yes I know it’s a miracle, but I leave for Buenos Aires on Monday for three piano shows with the orchestra and so wanted to get the GORR online before I left.
For those of you not living in Argentina and not able to attend any of the concerts, here is a sneak preview of the set I intend playing, although things might change! They often do with me!!

Once back home I have to do a lot of preparation in readiness for the Lincoln show and filming. I am really looking forward to this and preserving a very special memory of all that Piano Portraits has managed to achieve over the past 18 months or so and on the 7th the Lincoln show happens and it will be all hands to the plough from the crack of dawn.

On the 10th I will be off to the Granary for a bash of a completely different sort where I will be amongst piano tuners and restorers for their get together lunch and I’ll be very interested to see if they eat with their tuning forks!

On the 15th I fly to Elche, (no I don’t know exactly where it is either, although I don’t think it’s far from Valencia), where I will be doing a concert the next day with Valentina Blanca guesting as vocalist as she did at our Sicilian concert last year, or was that 2 years ago?

I then start work in earnest on a couple of pieces that Jon, Trevor and myself have been working on as well as making preparations for a new solo album - more news of that in the April GORR.
On the 24th I fly to Napoli for a piano concert that night. I should be relatively tired I reckon as to catch my flight I get up at 3 in the morning to go to the airport!

Then it’s more work in the studio which will spill over into April.

I’m sorry to finish on a really sad note, but Cyril, our beloved Moon Bear has sadly passed away. As you can imagine, Rachel and I are devastated.

The wonderful Animals Asia team worked tirelessly to bring him back to health after he was rescued and slowly but surely he started to improve, even growing blonde hair which was unheard of for a moon bear.
Just as Rachel and I were preparing to travel to China to see Cyril, we received the devastating news that because of his initial appalling and brutal treatment, he now had terminal liver cancer and a few days later we lost our beloved bear.

Towards the end, Cyril sought comfort in fresh and dried banana leaves and hessian sacks. He constructed a gorgeous nest and would gladly accept as much substrate offered him. He stopped eating everything but pumpkin and all things sweet. He loved watermelon, sugar cane, condensed milk and pumpkin ice blocks.  He would gladly accept the extra pieces of pumpkin that other bears refused. The team took such wonderful care of him until his end. We are so grateful to them.

Cyril was buried by a small group of loving people from both Chengdu and Nanning. He was covered in a blanket of hessian sacks, dried banana leaves, pumpkin, condensed milk and watermelon. They planted a banana tree sapling there so he will have an endless supply of substrates to take with him.
RIP Cyril. 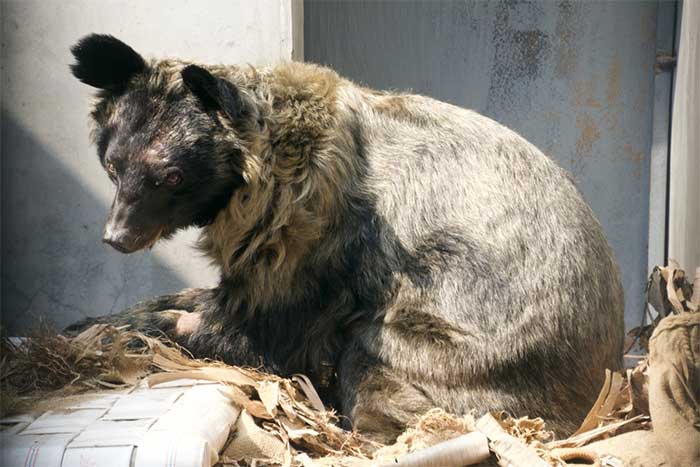